What is a Salary Cap? 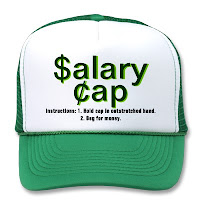 Salary Cap - The maximum amount of money a team can spend on their players in any given year.

For instance, if a league has a salary cap of $100 million that is the max they can spend on paying players every year.

Some leagues have salary caps and others don't. See how your favorite sports league deals with salary caps.


NFL
The current salary cap for 2013 in the National Football League is $123 million. This includes salaries and bonuses. However, player bonuses are spread out over the life of the contract and not counted in the year the bonus is paid. So when Tom Brady signed his new 5-year deal with a $30 million signing bonus his bonus will be counted as $6 million per year against the cap in addition to his salary and other bonuses (roster bonus, workouts, playoff appearances, etc.)


NBA
The National Basketball Association has a mix of a soft cap and luxury tax. The soft cap is meant to allow teams to exceed the salary cap in order to retain the rights of players that are already on their team. The NBA also has a maximum salary for individual players with a maximum contract length as well.


MLB
Major League Baseball does not have a salary cap but they do have a luxury tax. So a team can hypothetically spend as much as they want on players but they have to pay a penalty above the luxury tax threshold. The current threshold is $179 million per year. The first time a team exceeds the luxury tax they are assessed a 22.5% tax. The second time they must pay 30% of the amount they exceeded the tax. So when the New York Yankees have a $250 million annual payroll they must pay $16 million in luxury tax ($250 million - $179 million = $71 million; $71 million x 22.5% = $16 million).


Conclusion
The salary cap is one of the most effective ways for professional sports leagues to maintain parity. It's part of the reason the NFL and NBA have become so popular. It helps keep every team competitive so no matter how big the market your team can win on any given Sunday.
Newer Post Older Post Home